Behind the Book: Stonehenge 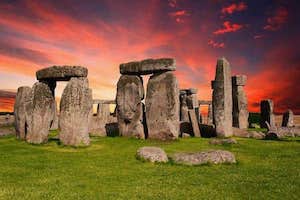 Mystery surrounds Stonehenge, the ancient circle of stones on the Salisbury plain. There it sits, rising up in the middle of a large area of open grassland. Speculation about why it was built have stumped scholars for hundreds of years. Legends about fertility rites, sacrifice, and even magic have grown up around it. The huge size of the stones and their placement in such an exact manner raise questions about the builders and the manner in which they transported and set the stones into the ground. Maybe, it wasn’t built by earthlings. Maybe it was built by aliens from some other galaxy. Or maybe, those legends about lost magic really are true. Could the Druids, who might or might not have had some magical power, have built it?

That question spurred my imagination to set the climax of Moon Bright at Stonehenge. Where better to have a showdown among the evil sorceress Nulkana, the Lord High of the Legion of Baal, a Druid, and a cursed princess? But I was curious about the real reason for the existence of Stonehenge, so I did some research. I discovered that the monoliths were set in place long before the Druids as a sect of wisemen/priests came into existence. While historians aren’t exactly sure who built it, they have ascertained that it is many thousands of years old. They have also discovered that it is a sort of calendar.
Back before we had workdays and weekends, and banks and insurance companies gave away free calendars, people wanted to mark the passing of the seasons in order to plant and harvest their crops and hunt at the best time of year. They had learned that two days every year, one in the warm season and one in the cold season, night and day last an equal amount of time. Those were the equinoxes. They also learned that on one day in the summer, daylight lasted the longest, and on one day in the winter, it was the shortest — the summer and winter solstices. If your life depended on knowing the best time to grow and hunt food, you might want to create a permanent place to mark these special days, so these ancient people placed stones in the ground to observe them. Site lines within the ring of stones to the rising of the sun and moon were discovered as far aback as the sixteenth or seventeenth century. Scholars also learned that Stonehenge marked the eclipses of the sun and moon, both very frightening occurrences if you had no idea how they came about. If you were a wise man back in prehistoric times, knowing when one of those phenomenon would take place would make you very powerful, for you could use that prediction as a way of proving your power over the celestial bodies.

Archeologists have discovered that the area around the standing stones contains burial mounds and cremation sites. The remains of a building have been found, although its use has yet to be discerned. A ceremonial avenue leads from the River Avon to the stones, which suggests that it was used for observances and celebrations of large numbers of people. Other smaller circles of holes nearby have also been discovered and lead archeologists to speculate that the standing stones were the focal point of a complex of structures. I’m sure that as research goes on, more and more will be discovered about the purpose and use of the site. But even as we learn more, we can still be in awe of the ingenuity and intelligence of the people who built it. And our imagination can still conjure up scenes of magic and fantasy.