Behind the Book: Carnevale 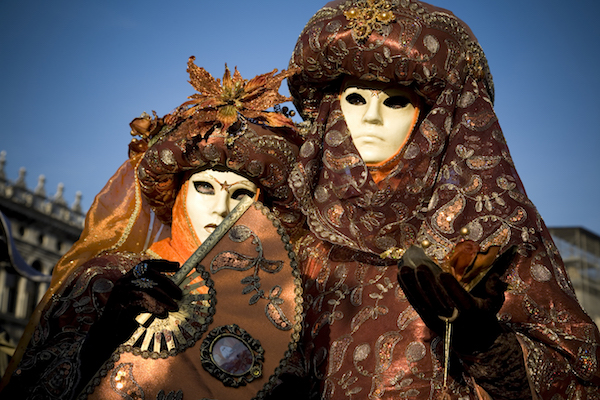 Since much of the action in Moon Dark takes place during the celebration of Carnevale, I thought I’d share a little of the information I learned when I was doing my research.

The Carnival of Venice, or Carnevale, has been in existence since the eleventh or twelfth century. It arose around the Roman Catholic time of Lent, the forty days before Easter, during which Catholics fast and abstain from eating meat. Back then, they also abstained from eating fruit, eggs, and dairy products. The word Acarnevale* most likely comes from the Latin: carne + vale, meaning A farewell to meat.* So before Lent arrived with its strict dietary restrictions and serious reflection on sins, the Venetians would celebrate.

By the eighteenth century, Carnevale occurred for six months out of the year. It began on the first Sunday in October and lasted until Christmas. As the bell for vespers, or evening prayer, rang on the feast of Epiphany, ten days after Christmas, the party started up again, lasting until Mardi Gras (Fat Tuesday), the day before Ash Wednesday when Lent would begin with its fasting. The Feast of the Ascension, forty days after Easter, marked the start up of the festivities again for another ten days to two weeks during Ascensiontide. Sabrina and Alessandro meet during this period of Carnivale, which would be late spring. By the end of the book, Carnevale is over.

Besides the long period from October to Ash Wednesday and the shorter period after Ascension, public festivals and government elections were also celebrated by days of Carnevale. Adding up all those days brought the time the people of Venice frolicked to half the year. There were fireworks, acrobats, musicians, puppet shows, and fortune-tellers to entertain the people. Wild beasts such as a rhinoceros, apes, or bears were displayed. A hot-air balloon might ascend. Naked gondoliers might have a contest in building a human pyramid. People danced, shouted and laughed.

It was a time when convention was tossed aside. Everyone wore a mask, from the Doge (the head of the Venetian government) to the lowliest servant. The disguise allowed free speech for everyone, and restraint was tossed out the window. Concealment and anonymity was the rule, and no one gave any sign that he or she recognized the person next to them. Anyone, noble or commoner or thief, could walk into a convent, sit down at cards, or enter any salon. Women could enter cafes and have forbidden adventures. Men dressed as women, and women dressed as men.

We can’t think of Carnevale without bringing to mind beautiful, elaborate masks, and they have been a part of the celebration for a long time. The first document that mentions masks comes from the thirteenth century. It is a description of the practice of masked men throwing perfumed eggs at ladies, and its prohibition by the Venetian ruling council.

The most ubiquitous disguise is that of the bautta. Both Alessandro and Sabrina wear this costume, as well as Antonio, Alessandro’s twin. It could almost be considered the uniform of Carnevale. It consists of a long black cape, called a tabarro, with a black hood and a tricorn hat. The mask is plain white. Both men and women wore this, and it disguised both a person’s sex and social standing, allowing them the freedom to flaunt convention.

On May 12, 1797, the partying came to an abrupt halt when Napoleon invaded the city. In subsequent years, the celebration of Carnevale fell into a decline and was completely outlawed by Mussolini in the 1930s. It wasn’t celebrated again until 1979, when it was revived by a group of local artisans.