Behind the Book: Napoleon 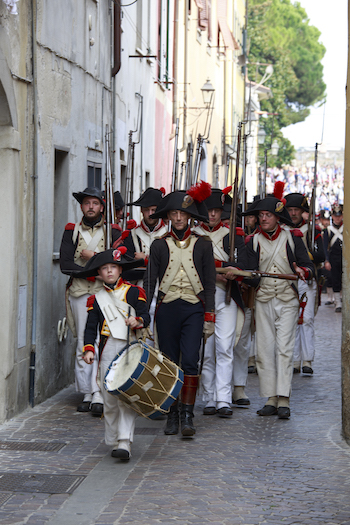 Sarzana, Italy – September 28, 2013: commemorative and historical fest of the Napoleonic Wars which is celebrated every two years in the medieval town of Sarzana, Liguria Italy. It is called Sarzana Napoleon festival

Napoleon Bonaparte makes a few cameo appearances in Moon Dark, and his Italian campaign is part of the historical background of the book, so I thought I’d provide a little explanation, much condensed.

Napoleon was promoted to the rank of General at the age of twenty-six and given command of the Army of Italy the following year (1796). After the French Revolution and the beheading of their king, the French were at war with Austria and other factions in Europe that supported a monarchy. The French Directory, the five men who ruled France, had planned a three-pronged attack against Austria. Napoleon was to attack from the south. After outmarching the Austrians, he defeated them and triumphantly entered Milan, which was the seat of the Austrian governor of Lombardy. (Italy was organized and governed very differently than what we know today.)

Part of the campaign against Austria was fought in the Veneto, the territory in Italy west of Venice that the city controlled. Despite this, the Venetian Republic remained neutral. But the French Directory looked upon Venice with greed, wanting to extract several millions in order to bolster their coffers. Napoleon had already occupied several cities belonging to Venice. He came up with a plan to threaten the Doge (the ruling magistrate of Venice) with invasion if the French army was harassed or hindered in any way while he waged war on Germany, one of Austria’s allies. He also instructed the government of Venice to embrace republican ideas and allow its citizens certain freedoms.

The Doge and his Council of Ten and the Venetian Senate scrambled to find a diplomatic solution. Meanwhile, insurrections led by Italian supporters of the French and instigated by French agents took over three cities near the western border of the Veneto. But the peasants did not support these take-overs. French officers and soldiers were taunted and harassed. In the countryside, they were often ambushed and killed. Furious, Napoleon demanded the arrest of the individuals involved and that they be handed over to his punishment or he would declare war on Venice. The city responded by sending representatives to negotiate.

Soon after, during the Easter festivities, violence and street fighting broke out in Verona, and by the end of the day, the French were driven out of the town. The Venetians denounced the violence and killings, but Napoleon would hear none of it. He demanded the city give up its oligarchy (a government run by a few people) and turn over the perpetrators. Venice was afraid of a popular uprising. Panic was widespread throughout the few members of the Senate who still remained in the city. They gathered and voted to dissolve the Republic. Two days later, on May 14, 1797, one of Napoleon’s generals with 4,000 troops occupied the city.

Because of the constraints of plotting, I left out much of the negotiations going on at the time my story takes place. I also wanted Carnevale to be over before the story ends, so I used literary license and moved the actual invasion to June, rather than May. In my research, I found implications that much of the harassment of the French by the Italians was actually instigated by the French themselves, in order for Napoleon to place more blame on Venice, so he could conquer it. The city was a treasure trove of booty, and he wanted its plunder. Whether he was the instigator of the peasant attacks or not remains only for those who were there to know.