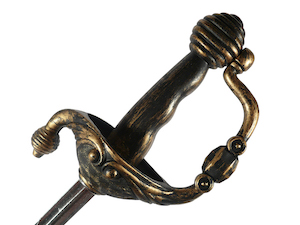 I am Alessandro Flavio Baldassare d’Este, Prince of Auriano. I am a prince of nothing except the castello of Auriano and its surrounding farms and vineyards north of Venice. The principality of Auriano was taken over by the Venetian Republic during the height of her glory and power centuries ago. The Doge and Council of Ten, the ruling body of Venice, decided to allow my family the right to keep our title if we pledged our devotion and allegiance to the city. That was centuries ago. We live as any other citizen of the city, although the title does have certain benefits among society. We are held in high regard by the citizenry, although that may also have something to do with our wealth, which we have gained through trade. Yes, we are merchants, traders in exotic goods. Gathering wealth is approved and applauded in Venetian society, no matter one’s social standing. And we have gathered a fair share over time.

I am a man in his prime, of the age of twenty and eight, of clear eye and healthy stature, except . . . but, that in a moment.

I am a twin, the first of two sons born to our mother and father, and the eldest by several minutes. My brother, Antonio, enjoys complaining about being the second twin and having to bear the burden of living under the shadow of his sibling. But we are close as brothers and friends, for we share many things. We also have a sister, Allegra, who is younger than us and living in Paris. We miss her, but it is necessary for her to live far away to keep her safe.

Our parents are both dead, murdered by an ancient evil sorceress, Nulkana, who is greedy for what she can not have, the magical Sphere of Astarte. Our lands and people of Auriano were protected by the Sphere for many generations until evil entered our borders. The Sphere is an ancient artifact that was hidden in a secret chamber below our castello. It kept our borders safe, our fields green, and our wine sweet. It is shaped like a hollow ball made of interlocking pieces of amber. As long as the pieces were secure and correctly connected, the Sphere gave abundant life to the land and our people. But many generations ago, Nulkana became the advisor to my ancestor. She discovered what the magical Sphere could do, and so she coveted it for herself. My ancestor learned of her treachery, cut the Sphere apart and scattered the pieces throughout the known world. Furious, Nulkana murdered him and cursed all his descendants. We now live under this curse until we can find the pieces and reassemble the Sphere.

The Sphere can also bestow immortality, besides power and wealth, and it is sought by those with dark intent. Nulkana is one of those, and she seeks it for immortality. She has found a way to remain alive using dark magic since she killed my ancestor centuries ago. Now, she would like nothing better than to do away with us. But she lets us survive because she thinks one day we will lead her to the pieces of the Sphere, and then she will steal them and keep the Sphere for herself.

The Legion of Baal also would like to find the Sphere. The Legion is a far-flung association of men who seek the power and wealth the Sphere can bestow. I do not know how long this association has been in existence, but certainly as long as my lifetime, and perhaps longer. They are also our enemies, but they are enemies of Nulkana as well. I would enjoy seeing them destroy each other.

My father found one of these long-lost pieces when he was quite young. When Nulkana learned of this, she demanded he give it to her. Knowing her intent was evil, he sent it away but never revealed where. She spitefully murdered both my parents in front of me and my brother and sister and burned our castello. The event was frightening and devastating, and occasionally, I still have nightmares.

We all had to deal with the horror of that day, but as the eldest, the responsibility of keeping both my brother and sister safe fell to me. Antonio and I permanently moved from Auriano to Venice, and we sent Allegra to live in a convent in Paris. I vowed to break the curse and kill Nulkana, no matter what it took. I settled on a plan that would allow us to keep our curse a secret and move about freely in Venetian society, so that we might glean information about the whereabouts of the pieces of the Sphere. My brother, my twin, has suffered with the decision I made, and I suffer because he does. I have done my best, but perhaps the path I took was not the wisest. After all, I was merely a lad of twelve when my parents were killed.

Antonio and I were taught and guarded by our Guides, brothers who are members of a family of minor wizards who pledged themselves to keeping the House of Auriano safe. They arranged tutors for us so that we might learn everything we would need to know in order to become members of Venetian society. We studied geography, mathematics, navigation, Greek, Latin, and many of the languages of the Continent. Besides that, we were taught the social graces, and we practiced swordplay as well as how to shoot. Our Guides became our guardians, stand-ins for our parents, and our friends, even as they remained our servants. But we hold them in higher esteem than any other who serves us. Without them, our lives would not be as rich as they are, despite our curse.

The piece of the Sphere of Astarte that my father found and sent away has not been recovered. When Nulkana set our castello ablaze when she killed our parents, most of the contents were destroyed. If my father left a clue to the whereabouts of the piece, it is gone. But I feel I am close to discovering where it might be. Until then, I must deal with the curse and the plan I put into motion.

What is the curse, you ask? I will tell you. It is the Curse of the Shadow. Because my brother and I are twins and the eldest, we share the brunt of most of the curse, but our sister is also burdened by her share. The curse comes upon me when the moon is new and dark in the sky. Then I become a living shadow with only the senses of sight and hearing. The change to shadow is devastating, as I lose the sense of taste, smell and, especially, touch. Not being able to feel anything beneath my fingers, not being able to have physical contact with another wears on my soul. Can you imagine having no sense of touch? To not feel the breeze, cool water running through your fingers, or the feel of skin against skin? It is isolating and desolate. I have learned to live with the loss, but during that time of the waxing of the moon, I more keenly feel my lack of humanity. Only when the moon is full do I become a true man of flesh and bone with all the sensations which accompany that. The change from shadow to human is uncomfortable, as feeling returns to my limbs. But more than the unpleasant pins and needles of returning to human form, I enter the period of time we call the Hunger. All of my senses return in a rush and are heightened. I crave anything that might feed them, spending myself in an orgy of food and drink and women. I am shamed by this behavior, for it is that of an animal. But if I do not feed these cravings, I will remain shadow for the rest of my life. When the transformation is about to take place, my brother and I seclude ourselves in a small casa we have procured just for that purpose.

The curse does have some compensation. If I am injured, I heal more quickly than a normal man. I am able to move about quickly and unnoticed, so I listen in to conversations and search hidden places, all in the hope of finding a piece of the Sphere of Astarte. Over time, I have learned to communicate with my thoughts and move objects with my mind. Occasionally, I am able to protect the inhabitants of the city from thieves and murderers. I laugh at the expressions of astonishment and fear on the faces of these outlaws when they find themselves tossed into the nearest canal by a shadow. It was one of these murderers I followed that brought me to the tiny chapel of San Magrita, and there I learned that, perhaps, I was getting close to discovering one of the pieces of the Sphere. The assassin had been sent by the sorceress Nulkana, and she would only bestir herself if she thought she might profit. It was in that tiny chapel that I saved an Englishwoman from a cursed stiletto. And it was in that chapel that my sense of touch awakened.