Behind the Book: The Catacombs of Paris 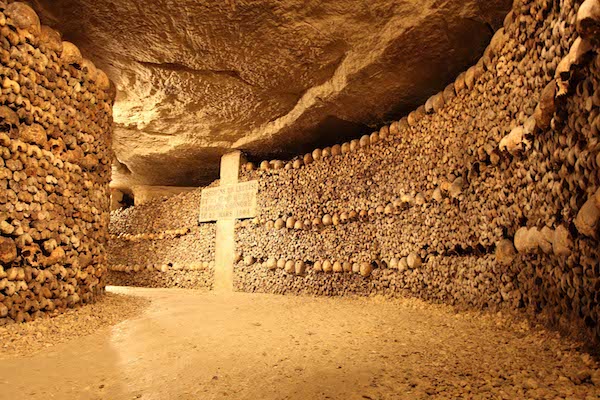 Because Le Chacal’s lair is in the Catacombs beneath Paris, and Solange and Antonio have a few encounters in its chambers, I thought I’d share some information about this underground labyrinth that I discovered through my research.

The Catacombs which wind under the city of Paris for miles began as a quarry for the limestone which was used to build many of the buildings of the city. By 1785, many of the cemeteries of the city were overflowing, in particular Cimetiere des Innocents, which had been used for burials for six hundred years, and Cimetière des Errancis, which was used to bury victims of the French Revolution. Basement walls that abutted the cemeteries caved in. The ground level in these enclosed areas had risen ten to twenty feet from all the burials. Graves were not filled in properly or were left open. People living near the cemeteries became sick from the unhealthy conditions. That year, the huge project to move the bones of several million skeletons from the cemeteries into the underground passageways and caverns of the quarries was begun. It took twelve years to complete. All the bones were transported at night.

Although I have used a bit of poetic license in Moon Shadow by having the Catacombs complete with the walls and the ceiling in Le Chacal’s main chamber decorated with intricately placed bones, the artistic placement of the bones actually didn’t occur until 1810. At first the skulls, femurs, tibias and all the other bones were piled in a haphazard fashion. But the traps that Le Chacal has created in the story to protect his sanctum are not far from the truth. There are deep, nearly bottomless pits, bits of monuments taken from the above-ground cemeteries, curved archways, thick pillars, large and small caverns, and a maze of tunnels, some with water running through them. The tunnels wind and curve for 186 miles and are 82 feet below the city. Many of the tunnels run parallel to the city streets above and have the same street signs. Some signs include the fleur-de-lis, the mark of the king, and some have the decoration scratched out, an indication of the Revolution.

Besides being used as a repository for bones, the Catacombs have provided the people of Paris with other uses. Before the French Revolution, some nobles threw wild parties there. Illegal raves still occur. During World War II, the Catacombs became the headquarters of the French Resistance, right beneath the feet of the German occupation army. In more recent years, the police have discovered a cinema with a large screen and chairs, reels of recent films, a fully stocked bar, and next door, a restaurant. Although the Ossuary (a place for the deposit of bones) is now one of the official museums of Paris, the Catacombs stretch for miles beyond, and have multiple secret entrances. People still slip in to explore, commune with the silent dark, and conduct all sorts of activities, mostly illegal. But if you ever visit Paris, will you be brave enough to descend down into its depths? Because above the official entrance is a plaque which reads:

[Halt, this is the realm of Death.]

Return to Moon Shadow
Home  »  Books  »  The Auriano Curse  »  Moon Shadow  »  Behind the Book: The Catacombs of Paris