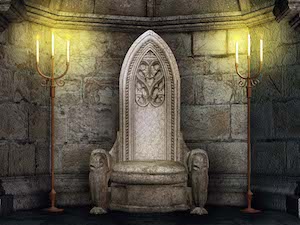 I am Jean-Jacques Bayard, Le Chacal (The Jackal), also known as Le Roi des Voleurs (King of the Thieves). I was not always an outlaw, living by my wits, hiding in the underbelly of Paris. At one time, I was respectable and as comfortable in opulent surroundings as any aristocrat. I was the under steward of the chateau of the Chevalier Boucher. My father had been steward on the adjoining estate and had trained me in his profession from an early age. He forced me to read the classics, to learn geography and history, to do large sums both in my head and on paper. He also taught me about the arrogance and cruelty of the man he worked for and those like him, and how to be subservient yet crafty. When the chevalier’s steward became too old to manage the estate on his own, I was the logical choice to help out.

I enjoyed my work, exhausting though it was, and beset by the dissatisfied and nasty criticisms from the steward. He was jealous of my young age and believed I was trying to oust him from his job. While I wanted his position, I was willing to wait until he expired from old age or perhaps a fall down the stairs. I met a young woman, one of the upstairs maids, with whom I formed an attachment. We planned to marry when I could save enough money.

One evening after returning from an inspection of the kitchens, I was called into the Chevalier’s presence. The old steward was there, along with a guest, the Marquis de Vernoux. A painting had been damaged, not just any painting, but a portrait of the chevalier’s mother. I was accused of not properly overseeing the maids. The steward had been in charge of that particular area of the chateau, having told me to oversee the polishing of the silver. Protesting my innocence did me no good, for the old steward had planned his attack with cunning and precision. I was dismissed, forced out the door of the chateau, and unable to collect my few possessions. I was homeless and penniless. Desperate, I snuck back into the chateau to collect my few possessions and the tiny cache of livres I had saved. I was caught in the act, accused of stealing. The chevalier decided to mete out his own justice. I was dragged out to the stableyard where he forced one of his footmen to cut off my hand for attempting to steal back what was mine. I was saved from losing the other hand by the Marquis de Vernoux, who had wandered out to watch the entertainment. At that moment, I knew I was beholden to Vernoux for the rest of my miserable life.

I fled to Paris. I had lost everything: my livelihood, my dreams, the woman I was to marry. And one hand. So I started a new life by taking from those who had taken from me. I joined the sans-cullottes, those who were rebelling against the nobles and the king. I became a collector of information and a thief, one who was very dextrous and deadly with a single hand. I became known as someone who knew everything. And I used that information to coerce and influence. The flotsam of the Paris gutters and back alleys flocked to me, to my haven beneath the city in the Catacombs. Then I was contacted by Vernoux.

I knew he would come to me eventually. The guillotine was chopping off the heads of the nobles at an alarming rate. He wanted me to help him, not to escape as so many of his fellow aristocrats had done, but to become invaluable to those who were in power. I supplied him with information. In return, he kept the night watch away from me and my thieves and cutthroats. We were tied together tighter than a sailor’s knot. One day, in the middle of all the turmoil in the city, a young girl tried to steal a loaf of bread from me. I caught her as she pulled the loaf from my pocket. I had been saving that bread to sop up the last of the gravy from a stew pot I had stolen, so I was angry and would have normally sent her sprawling. But she was a beauty, and something about her defiance and bravery made me think she could be useful. So I took her in, along with her younger brother. I taught them all my tricks and educated them about the underworld of Paris, and I taught them manners and everything my father had taught me. I had learned that knowledge was sometimes more valuable than gold. When they became old enough, I sent them into the streets to steal, but they were impatient with the small amount of loot. They wanted to do something else, so they became highwaymen and brought in more than ten of my best thieves.

When she became old enough, I taught her about sex. That was a sweet time, but she decided that she did not love me, and so she ended it. I could have told her sex wasn’t about love, but she would learn that herself. I could have forced her, but I wanted her goodwill and the coins she brought in more. Then word came that the authorities were about to raid my lair in the Catacombs. I contacted Vernoux. I knew his price would be high. He had seen the girl and he wanted her in exchange for halting the raid. So we made a deal. He could have her, but she would still rob the wealthy coaches once or twice a month as they came into the city. Both sides were satisfied, although the girl was not happy. The arrangement worked for quite a while.

Until she and her brother robbed that Italian duke.